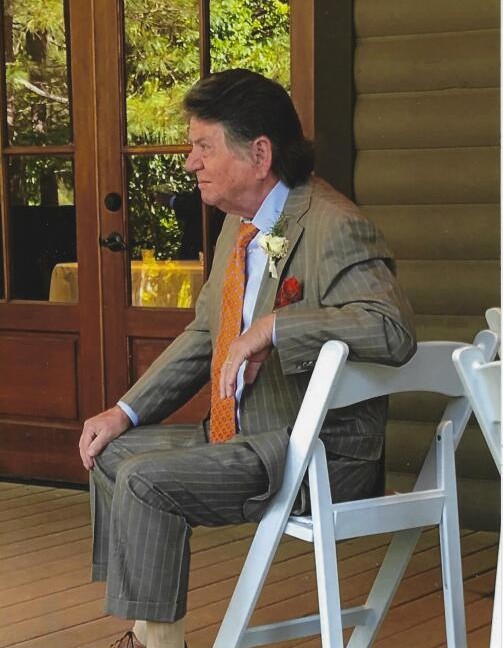 TUPELO – One of the most vivacious, dapper and engaged souls ever to come through these parts met his Creator at 4:55 PM on Monday, December 20, 2021, after sustaining injures from an accidental fall 5 weeks ago. Andy Mac West had a sterling personality, was always dressed to the 9s (he had 3 closets at the house and his wife, Judy had one), and always had a smile and story to share with his countless friends.  Andy owned Andy West Insurance Agency in Tupelo for many years.  He was a longtime school fundraiser afterwards and spent the last 13 years as a well-beloved fixture at MLM Clothiers where he was always upbeat and ready to receive, dream interrogate, pull jokes on and otherwise encourage and enlarge the cause of humanity with their many customers. He certainly enjoyed the daily “happy hour” there and was the life of the party.  Andy married Judy Davie Franks West on Nov. 20, 2004, the wind beneath his wings, the last 17 years. They faithfully attended the Unity Presbyterian Church east of Plantersville.  Andy was born in Guntown, MS on Dec. 30, 1939, to the late Herman Lee West and Lorena McAnally West. Andy graduated from Tupelo High School in 1958 where he was a cheerleader. He attended Northeast Miss. Community College and later graduated from University of Southern Mississippi (Southern Miss. to the top) with a marketing degree.  Andy was a patriotic American and served in the U.S. Airforce from March 1, 1964 to Jan. 8, 1968.  Andy’s life touched so many and his legacy will be that of a handsome dude whose life was centered around laughter, joy and genteel living.

A service celebrating his life, with Air Force honors, will be held at 11 AM on Thursday, Dec. 23, 2021, from the Sadie Holland Memorial Chapel at Holland Funeral Directors-Tupelo with his pastor, Rev. Dr. John Armistead officiating.  Burial will follow in Tupelo Memorial Park on Joyner St.  Visitation will begin at 4 PM on Wednesday until 7 PM at the funeral home and at 10 AM on Thursday. Pallbearers will be Joe Yarber, Richard Porter, Fred Pitts, Dan Matthews, Jack Trompore, and Jim Spencer. Honorary pallbearers will be Dan Bullard's Thursday Coffee Club and all past and present employees of MLM.  For those unable to attend, the service may be viewed at www.hollandfuneraldirectors.com/Live-streaming.