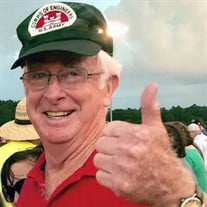 J.C. Cox of Water Valley, MS passed away suddenly on Wednesday, December 22, 2021, at the age of 74. Born September 21, 1947, he was one of five children born to the late Ray and Sue (Martin) Cox in Water Valley. He was married 45 years to the love of his life, Stephany (Gray) Cox, who preceded him in death.

J.C. loved life and had many friends. He had a big heart and was very giving of time and sharing his vast automotive knowledge, especially automotive antiques. Of his many passions and hobbies, restoring antique cars was probably his favorite. He also loved traveling and attending car shows throughout the south and collecting hard-to-find parts for antique cars. For many years, he and his long-time friend, Jack Hughes, were co-owners of C & H Car Sales. Whatever J.C. did, he approached meticulously and with great organizational skills.

Upon finishing high school, J.C. attended Northwest Miss. Jr. College. Most of his working career was at Binswanger Mirror Products where he served as dispatcher and retired after 40 years. He retired from the Army National Guard as a Sargent after 22 years of service.

Along with his parents and wife, J.C. was preceded in death by his brother, Steve Cox, one niece, Pennie Pullen McKinney, and two great-nieces, Kaitlyn Spencer and Bailey Smith.

Visitation is planned for Tuesday, December 28th in the Gardner Room at Seven Oaks Funeral Home from 12:00 Noon to 2:00 p.m. The Service will immediately follow at 2:00 p.m. in the Henry Chapel of Seven Oaks. Burial will be in Oxford Memorial Cemetery. Bro. Craig Baker will conduct the service and Linda Smith and Jerry Holt will share fond memories as they celebrate J.C.’s life. Keith and Darlene Burney will provide the music.

Lastly, we rejoice for we know this is not the end. We will see our brother again!