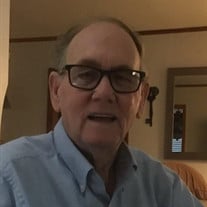 Benjamin Harold Baggett, age 84, of Water Valley, MS left this earthly life Sunday, December 26, 2021, at his home with family by his side. He was born October 9, 1937, in Oxford, MS to the late Benjamin Buford and Irene (Lovelady) Baggett. After leaving school, Harold went directly into the Army National Guard and then joined the United States Air Force where he honorably served his country for Six Years. He is described by those who knew him best as quiet, kind, unselfish and loving. Harold was the kind of man who didn’t allow things to weigh him down. He loved his family and was proud to work hard to provide and take care of them. After his discharge from the service, Harold came home and went to Work for Big Yank where he held many positions, last of which was stitching room supervisor, where many of the employees mentioned how he was fair and honest. After Barbara started Lollypop daycare, Harold would help by doing whatever needed to be done and would later be named, and affectionately called, “Heygang” by the children. When he wasn‘t working, Harold loved to cut grass, work with his hands doing all sorts of home improvement projects and tinker with all sorts of things. He will be missed by many who knew and worked with him.

Visitation is planned for Friday, December 31, 2021, in the Gardiner Room at Seven Oaks Funeral Home from 6:00 PM until 9:00 PM. A funeral service to honor his life will be at 10:00 AM at First Christian Church with Bro. Jerry Holt officiating. Burial will be in Anchor Cemetery.

Along with his parents, Harold was preceded in death by one daughter, Tracy Baggett Kane, one brother, Edward Earl Baggett; and three sisters, Lucille Pannel, Evelyn Dickey, and Myrtle Kitchens.