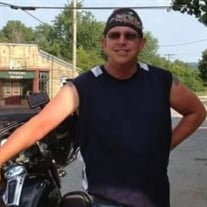 Tony Ray Wiley, age 52, of Water Valley, MS died Wednesday, December 29, 2021, at Baptist Memorial Hospital in Memphis. He was born July 15, 1969, in Bossier City, LA to Johnnie and Marcia Wiley. After high school, Tony joined the United States Air force and he served our country for four years, becoming the youngest crew chief in the history of the branch. After leaving the service, someone asked Tony to build a house for them, something he knew nothing about. So he went to the library and read books about it and taught himself the trade. A craft that he would utilize the remainder of his life. Tony genuinely loved helping people, and in 2009 he and Trish founded the “Branch of Hope” sobriety center which they operated for the next four years. During this time they helped over one thousand men on their road to recovery. He loved fishing with his dad, riding motorcycles, and playing any chosen song on the guitar.

Visitation is planned for Tuesday, January 4, 2022, in the Gardiner Room at Seven Oaks Funeral Home from 11:00 AM until 1:00 PM. A memorial service to honor his life will follow at 1:00 PM in the Henry Chapel of Seven Oaks with Bro. John Coleman officiating.

Donation for final expenses can be made at the funeral home or at the following link:
https://fundthefuneral.com/tony-wiley