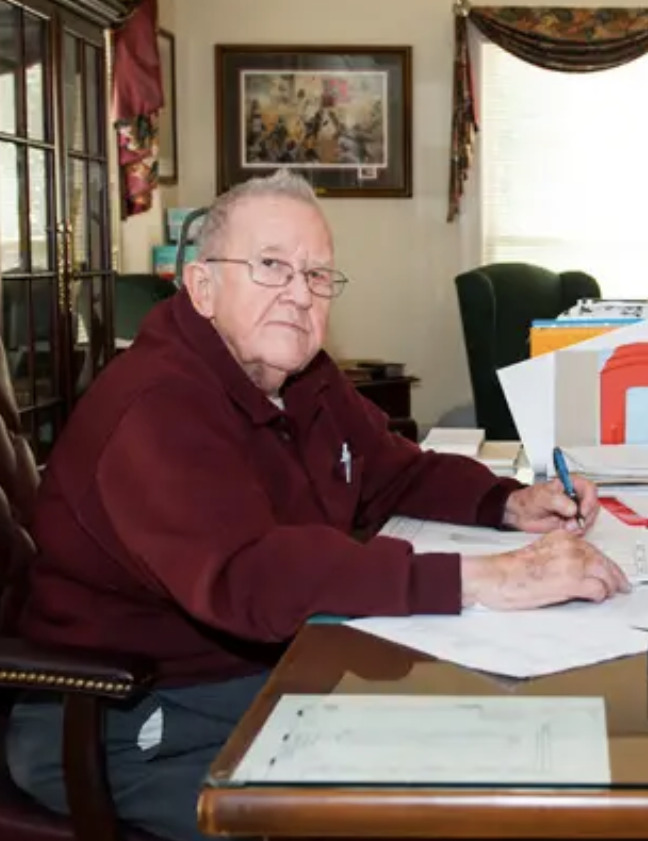 Dr. Wilbrod (Wil) St. Amand passed away at The Magnolia of Oxford Commons on January 7, 2022. He was 94 years old having been born in Old Town, Maine, to French Canadian parents, Wilbrod St. Amand, Sr. and Alice Michaud St. Amand. He was the third child of four siblings two of whom predeceasing him: Janet Lacadie (Robert) and Adelaide King (Walter).

Wil had a very interesting childhood growing up in the Great Depression, such as selling homemade potato chips, marketing hand-picked blueberries, and pickled fiddleheads (a Maine delicacy) for money. He also achieved fame as the town’s photography film developer and “soda jerk” at the local pharmacy. He achieved status as an Eagle Scout, and upon graduation from Old Town Maine High School, enrolled at the University of Maine, where he was also part of the ROTC program. He was deployed as a Navy yeoman and served in the North Atlantic during the last months of World War II. He returned to the University of Maine after the war, remaining in the ROTC program and graduating in 1948 with a Bachelor of Arts degree in Zoology. He was commissioned in the US Army Reserve upon graduation and began studies at the University of Tennessee, receiving both a Masters of Science degree in 1949 and a Doctor of Philosophy in Biology in 1954.

Upon his graduation he was employed at the Oak Ridge National Laboratory where he met the love of his life, Georgia Ann Sims, of Orangeburg, South Carolina, whom he was married to for fifty-six years. Also a biologist, both were known to be lovers of all animals and plants for the remainder of their lives. Wil accepted the position of Assistant Professor of Biology at The University of Mississippi in the fall of 1958, where he remained becoming a Full Professor, until his retirement in 1984. At Ole Miss, he was named the University’s Outstanding Professor in 1970.

Wil was a founding member of the Oxford Kiwanis Club and served as president and secretary for many terms. He especially enjoyed many of the service projects through Kiwanis such as ringing the Salvation Army Bell at Christmas, “Meals on Wheels”, Dictionary Project, and the automatic electronic defillibrator project which place an AED in every school in Lafayette County. He was very interested and helped organize the local Alzheimer Caregivers’ Support Group. He was a great influence over many dealing with dementia and had provided support both with resources and emotional needs to hundreds over the years. For his efforts in this field, he was given the statewide Mississippi’s “Dorris Award for Caregiving” by the Mississippi Department of Health in 2009. All his community enriching efforts led to his being named “Citizen of the Year of Oxford and Lafayette County” in 2013.

In the recent past he enjoyed working in the Lafayette County Society Genealogical room at the Oxford Public library. He assisted in the effort to document cemetery records of every cemetery in Lafayette County. He was very involved in the local veterans’ organizations where for many years he read the names of veterans who died each year at the local Veterans’ day ceremony. He was a very proud veteran since he had been both in the Navy and Army branches of the military.

“We sure are living in interesting times” -these were often the concluding words of Wil’s usually lengthy conversations with family and others. Perhaps some of it is due to his own wide range of life’s interest during these past 94 years.

No memorial service is scheduled at this time and memorials in Wil’s honor may be made to any of the organizations mentioned including the Caregiver Resource Center c/o Memory Makers Respite Day Services, 106 Skyline Drive, Oxford MS 38655 or the St. Amand Endowment benefiting the beginning biology courses at The University of Mississippi c/o UM Foundation, 406 University Avenue, Oxford, MS 38655.