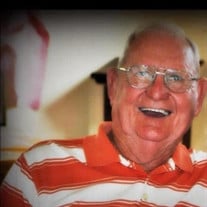 What we once enjoyed and deeply loved, we can never lose, for all that we love deeply becomes part of us. -Helen Keller

On January 16, 2022, Luther Milton Ray transitioned from this life to his heavenly home. He was born on August 16, 1930 in Webster County, Mississippi, to Luther Barrett Ray and Nannie Peeples. He had four brothers who predeceased him, Octay, Willie, Vernon and John, and one sister, Abby, who resides in Eupora.

He married Frances Dixon on June 4, 1949 and shortly thereafter they moved to Clay County, where they reared their three sons, Billy, Junior, and David. He worked at Babcock & Wilcox until his retirement. After his retirement, he still continued to work with Long Branch Fabricators. He was a steadfast and dedicated member of West End Baptist Church, serving in numerous capacities, including Sunday School teacher and deacon.

It would be nearly impossible to sum up the life of this this man lovingly called Grandaddy by everyone, so this will be dedicated to honoring the life of such an extraordinary man and the lives he touched with his wisdom, caring and affection by those who knew him best. His family.

Milton and Frances had three boys who demonstrated superior athletic ability. “Those Ray Boys” was a common phrase heard during Little League baseball all the way through high school, and even after, when Those Ray Boys played softball. For competitors, this was not a good thing. Those Ray Boys took competition to a whole different level. You can bet, though, front and center, always, sat Mom and Dad. Every game. No matter what. No matter where. To say they were proud is an understatement. They did not merely enjoy supporting them, they reveled in it and most likely played each moment with them. They saved every scrap of paper, every picture, every moment. Storing those treasures in their hearts. That love of sports and competitive nature extended to their grandchildren and great grandchildren. Watching the grands and great-grands was one of Grandaddy’s favorite things to do. He loved their excitement, he loved their grit and he loved that he was able to be there to see them.

Life Lessons. Everyone has them. But the key is who your teacher is. Grandaddy was the quintessential leader of life lessons. Junior said his biggest lesson was that Grandaddy told him to never do anything that can destroy your life. Wise words from a man who did not consider himself wise. He just lived his life with the pearls of wisdom he found everyday while reading his Bible. You never went into his house without seeing that tattered, but beloved, Bible on the table. But perhaps the greatest life lessons are the ones from the grands. Their memories, their perspective, his impact, his knowledge. Memories, so many memories. With Grandmother at the piano, he stood with his grands surrounding him singing old gospel songs with them. Going to church with him and sitting in the Ray designated pew surrounded by children and grandchildren, teaching them silently and steadfastly, by his actions as well as his words. Church was not an option; it was a necessity. Shelling peas and butter beans from his garden under the porch on a hot summer day or sitting in the swing outdoors watching them play. The food. Lord, the food. So much and so good. A bountiful harvest always shared happily and often. It should also be noted that “some” grandchildren always made sure they were the first in line and every time, but he loved every minute of it. He was famous for “Grandaddy’s Biscuits” and his breakfasts, but everyone can agree that his biscuits were truly the best (with apologies to Grandmother). All of that being said, Grandaddy could also be the first one to reprimand when necessary. Justice was swift and immediate. There are those who remember the infamous “BB gun bus shooting” episode when he wasn’t very happy, but even after the punishment, the love was sure to follow.

And he was a good steward. He knew hard times, he knew want. But first and foremost, God was first. In everything he did. He tithed faithfully. He taught by example. Whatever obstacle you face, you give it to the Lord. Whatever answer you need, you ask the Lord. Whatever need you have, the Lord will provide. He believed that everything would fall into place as long as you let the Lord have your life and lead you. He never asked for more, he never expected more. He was content with his life and how the Lord had blessed him.

Marriage. His one true love. His beloved Frances. The one who was the center of his world from the time they met until he closed his eyes to leave this earth. She was, as he once told me, the best part of him. He was devoted to her and she was devoted to him. Together, they made traditions that will hopefully continue on with his family. Every year before school, they took the grands to buy school supplies. You knew EVERY year you would get a birthday card with money, you would get a birthday dinner at Pasquale’s and, later, at Harvey’s. Special occasions were just that. If Grandmother wanted to get something for her babies, Grandaddy would make sure it happened. They were a tag team; you never got one, you got both. They balanced each other so well. He was devastated when he could no longer care for her and he never recovered from not having her by his side. He was the glue. He was the listening ear when you needed it. He was forgiveness even if you didn’t ask for it. He was love when you felt unlovable. He IS loved beyond measure and will always be present with his family. He was, without a doubt, the blueprint for an example of how to live a Godly and fulfilling life. I am sure when he reached the gates of his Heavenly Home and saw his Savior’s face, he knew his journey was complete when Jesus said, “Well done, my good and faithful servant.” Well done, indeed.

Honorary Pallbearers will be his nephews, James Ewing, Co-Workers at Babcock and Wilcox and Members of West End Baptist Church.