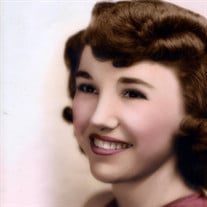 Ramona Cowsert Williams, age 91, passed away peacefully on Friday, January 14, 2022 at her home in Calhoun County. Born September 21, 1930, in Paris, Mississippi, Ramona was the daughter of the late Robert Warren Cowsert and Odell Brasher Cowsert. She loved to tell stories of her childhood adventures in Paris during the Great Depression. The family later moved to Water Valley and opened a country store, which was where she met the love of her life. After stopping in that day to buy gas, Ralph Williams immediately told a friend he had just met the most beautiful girl in the world, and Ramona confided to her parents that she had just met the man she was going to marry. They married in 1954 and were inseparable for 52 years, until Ralph’s death in 2006. Ramona was a homemaker and a devoted wife, mother, and grandmother whose family was her whole world. She also had many talents and passions. She loved antiques, and long before most people had ever heard of “picking”, had no qualms at all about knocking on a complete stranger’s door and offering to buy their furniture! She made the best fried pies and homemade preserves around. She and Ralph were active for many years in the square dancing community, for which she made her own costumes. She loved animals and was always surrounded by pets. She also enjoyed traveling, looking for arrowheads, and working in her flower garden. Ramona was a member of Parker Baptist Church.

Visitation is planned for Friday, January 21, 2022 at Turkey Creek Baptist Church from 1:30 PM until 2:00 PM. Services will follow immediately at 2:00 PM with Bro. Robert Randolph officiating. Burial will be in the Turkey Creek cemetery.

As well as her parents and husband, she was preceded in death by two brothers, Robert “Bobby” Cowsert and Edward Cowsert; and a granddaughter, Amanda Havens.