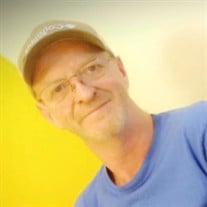 Larry Edward Barnett, 54, passed away Wednesday, January 19, 2022, at his home surrounded by family. Larry was born March 7, 1967, to Robert Wayne Barnett and Eloise Godwin Barnett. He was a dedicated husband, father, stepfather and grandfather. He always put his family first. Larry loved Auburn football and telling jokes. You would never see him without him telling a joke or two. Everyone either knew Larry or knew of him. He wore many names such as Larry, LB, Hot-dog, brother, uncle, husband, daddy and pawpaw.
Larry had to leave the furniture industry where he was always a hard worker, hard headed, yet, genuine. He was dedicated not only to his job but to those who worked under his supervision. When he wasn’t at work, you would find him camping, traveling, hiking or watching football. Auburn football. WAR EAGLE!
Visitation will be Friday, January 21, 2022, from 4:00 PM until 7:00 PM at the Booneville Funeral Home. Funeral services for Larry, will follow visitation. Funeral services will be held in the Chapel of Booneville Funeral Home with Bro. Sammy Barnett and Mr. John Miller officiating. Hannah-May, Larry’s daughter, will be paying a special tribute to her father. Booneville Funeral Home is in charge of arrangements.
He is survived by his wife, Carol Lee Smith; children, Luke Barnett (Brailey), Chris Russell (Alex), Bethany Miller (John) and Hannah-May Barnett; brothers, Sammy Barnett (Lee); sisters, Jean Lollar (Terry), Vivian Jordan (John), Patty Timmons (Rodney); grandchildren, Joey, Athena, Arheaya, MaeMae, and Scarlett; mother-in-law, Sharon Smith; brother-in-law, Mike Allison; and a host of family and friends.
He was preceded in death by his parents; sister, Jackie Allison; step-mother, Mona Barnett; and sister-in-law, Kelly Smith-Turner.
Honorary pallbearers will be Joseph Miller, Logan Barnett, Ethan Smith and Anderson Smith.
We find peace in knowing that Larry is now in Heaven looking down upon all of us. He is laughing, telling jokes and dancing with his mom, sisters and his grandbaby.