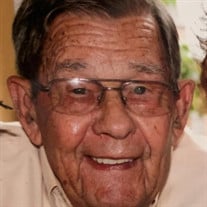 Travis Junior Cartwright, 97, affectionately known as “PePaw,” passed away peacefully on Friday, January 28, 2022. He was born to Claude Wesley and Hettye May Cartwright on January 11, 1925, in Prentiss County. He was a graduate of Booneville High School and continued his education at Tennessee Tech University, where he played on the basketball team, then graduated from Mississippi State University. On December 27, 1948, he married the love of his life, Eula Mae Mayo “MeMaw.” They enjoyed 71 years of marriage. For over 45 years, Eula Mae and Travis were faithful members of First United Methodist Church.
Travis was an entrepreneur at heart. He was hard working, determined, and in his own words, “never bored.” From purchasing the local pool hall in high school (which he ran until college), owning a taxi service, a motel and restaurant, being a banker, real estate developer, coach, teacher, principal and superintendent, Travis always put forth his very best and succeeded at every stage of his life. His best advice was to “stop and smell the roses.” The roses that were the sweetest to him were found in the automobile business. Travis enjoyed operating Cartwright Ford for over 40 years, his true passion. His greatest accomplishment in life was family. He was a doting husband, father and PePaw. From reading books to his grands and great-grands, singing songs, telling stories, teaching all 5 grands how to drive…PePaw was always present, and his influence shaped each of their lives. There was never a moment that went by that he didn’t tell his family how much he loved them. Family was everything to him.
Family left to honor his memory are his son, Gary Cartwright (Marcia) of Booneville; daughter-in-law, Susan Cartwright of Greensboro, NC; Emily Faucher (James) of Greensboro, NC; Molly Heathcock (Jason) of Homewood, AL; Shelley Roper (Ryan) of Tupelo, MS; Sally Cartwright of Greensboro, NC; Clint Cartwright (Heather) of Tupelo, MS; and 12 great-grandchildren, Lily, Julia Anne, Mary Katherine, Sadie, Travis, Audrey, Ella, Mae, Madeline, Emmy, Rebecca and James Jr. We would like to extend our love and gratitude to special friends Martha Shinault and Ruby Moore, both of Booneville.
Travis was preceded in death by his wife, Eula Mae; his son, Travis Terry Cartwright; his parents, Claude Wesley and Hettye May; and his only sibling, Merril Cartwright. Pallbearers were Clint Cartwright, James Faucher, Jason Heathcock, Travis Heathcock and Ryan Roper.