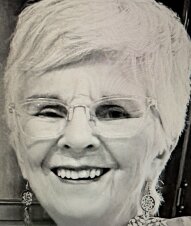 Ellen Franks Newsom died on January 18, 2022, at the age of 79 following a very short battle with mesothelioma. Born to Alice and Wendell Franks on April 8, 1942, in Baltimore, Maryland, Ellen grew up on the sandy shores of Lake Michigan in Long Beach, Indiana.

She graduated from the University of Michigan in 1964 with a Bachelor of Science degree in Nursing, after which she became an RN. While at Michigan she met her future husband, Walter Newsom, and they were married in 1964 in Michigan City, Indiana. Their honeymoon was a two-month, 11,000-mile tent camping trip in a VW Beetle visiting 18 western states and 20 national parks, the first of many adventures that they would share.
Upon their return, they made their first residence in Ithaca, New York, where Ellen practiced nursing with the New York Department of Public Health. In 1970, they moved to Columbia, Missouri where Walt received his MBA and PhD, and Ellen was a homemaker with their two children. In 1974, they moved to Starkville, Mississippi as Walt joined the faculty at Mississippi State University. Ellen resumed her nursing career at the Starkville Children’s Clinic and during summers at Camp Bratton Green until her retirement.
A quiet leader, Ellen was president of her high school student body, college dorm, MSU Newcomers Club, P.E.O., and Daughters of the King and Senior Warden of her church. A lifelong Episcopalian, she was active in a wide variety of ministries at the Church of the Resurrection for 47 years and held many leadership positions at the parish and diocesan levels.

Ellen and Walt were well traveled as they ventured to all 50 states, 101 countries, and all 7 continents together. Ellen paraglided in the Swiss Alps, piloted a plane across Tanzania, kayaked in Antarctica, snorkeled with whale sharks in the Philippines, floated for 19 days in the Grand Canyon in a wooden dory, and hiked to the Arctic Ocean in Alaska.

She was an avid quilter with the Golden Triangle Quilters Guild who took delight in making quilts for other people, particularly newborns. Many of Ellen’s family and friends sleep well under one of her beautiful creations.
Be it greeting first-time church attendees or comforting sick babies, she was sweet and compassionate to friends and strangers alike and a gracious and kind soul.

Ellen is survived by her husband of 57 years, Walt, of Starkville; son Matt Newsom, spouse Martha and grandsons Jack and Will of Charlotte, North Carolina; daughter Emily Cook, husband David, and grandsons Tanner and Tyler of Bartlett, Tennessee. She also has two brothers: Dan Franks and spouse, Kim Swanson of Clearwater, Florida and Martin Franks and spouse, Sherry, of Washington, DC; as well as numerous nieces and nephews.

A private, family funeral service will be held at the Church of the Resurrection in Starkville with inurnment in the church columbarium. A public memorial service and celebration of her life will follow later this spring.

In lieu of flowers and in memory of Ellen, please make memorial contributions to the Ellen Newsom Memorial Fund at Church of the Resurrection in Starkville (ecrstarkville.com/give) or the Seeds You Sow capital campaign at Camp Bratton Green / Gray Center in Canton, Mississippi (graycenter.org/giving) or the Leukemia & Lymphoma Society (lls.org).