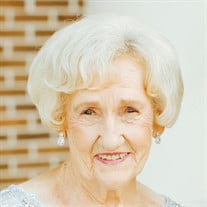 Mrs. Ruth Gary Hill, aged 91, passed away peacefully in her home on January 30, 2022 surrounded by her beloved family. She was born July 26, 1930, in Webster County, MS, the daughter of Chester Clyde Gary and Necia Tabb Gary. She spent her childhood in the Springhill Community of Webster County and graduated from Springhill High School. She then attended Sunflower Junior College, where she played as a Forward on the women’s basketball team, and she went on to graduate from Delta State University. Upon graduation, she served as an elementary school teacher for several years. In 1952, she went in search of a new pair of sandals at the Hill’s Department Store in Eupora, MS, and instead found her future husband, B. W. (Bernard Wallace) “Tug” Hill. They were married on July 26, 1953, and spent 62 loving years together until his passing in 2015. During their lifetime together, Mr. and Mrs. Hill owned and operated Hill’s Department Store and Hill’s Landing in downtown West Point for over 30 years, until their retirement in 2002.

Both Mr. and Mrs. Hill served as pillars of their family and the West Point community their entire lives. Mrs. Hill was a member of First Baptist Church of West Point, where she worked in the children’s department for over 50 years. She was an Eastern Star member and past member of the Pilot Club of West Point. Mrs. Hill enjoyed staying active in Forever Young at First Baptist, exercising with her PACE friends at The Wellness Center, and playing bridge several times a week with three different clubs. She also had a passion for traveling and had visited 49/50 of the states, as well as several countries. The truest joy of her life was to serve and support others, which was most evident in her years of helping children―a cause to which she unceasingly dedicated her time, affection, and resources.

Known to her treasured grandchildren as “Mimi,” Mrs. Hill was always dressed and ready for adventure. In fact, she often remarked: “If you ask me to go, I’ve already got my shoes on!” Mimi held true to her word her entire life; she never missed any of her family’s various events: from church choir programs to Oak Hill Academy basketball games; from trips out West or simply trips to Walmart; from the biggest life events such as births, graduations, and weddings to even the smallest ones―like nights of all-you-can-eat-crawfish at Rosey Baby with her grandchildren. (She didn’t even like crawfish, but she never let that get in the way of a dinner with her crawfish-craving grandchildren.)

Her devotion to her grandchildren could also be seen in one of her favorite hobbies: gardening. When granddaughter Katherine asked to hold her wedding reception in Mimi’s backyard, as her own mother had done, Mimi was overjoyed to continue the tradition and immediately began preparations. Mimi herself, with the company of her faithful cat Sassy, had placed over three thousand white periwinkles in her yard by the time of the wedding―a testament both to her green thumb and her infinite love for her family.

Mrs. Hill leaves her family with a lifetime of cherished memories, most especially those made over her table every Sunday after church. She served as a cornerstone of a family whom she fiercely loved all the days of her life. Mrs. Hill served many roles for her family: teacher, provider, confidante, #1 fan, and so many more. Her legacy is that of a strong-willed woman with a compassionate heart who was devoted to her faith and family.

Visitation will be on Tuesday, February 1, 2022 at First Baptist Church in West Point from 1:00-3:00PM. Funeral services will follow at 3:00 P.M. Burial will be in Greenwood Cemetery in West Point. Calvert Funeral Home of West Point is honored to be entrusted with the arrangements.