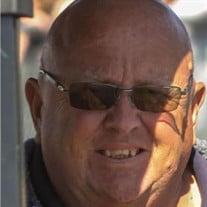 Terry Phillip Forsythe, age 63, of Holly Springs, MS died Wednesday, February 2, 2022, at Baptist Memorial Hospital in Oxford, MS from complications of Covid-19. Jabbo, as he was known to all who knew and loved him, was born October 15, 1958, in Jackson, TN to the late Marvin Forsythe and Louise Reeves Forsythe. After finishing school, Jabbo worked a number of different jobs, including driving a truck for a brewery, working in the parts department of the local Chevrolet dealer and owning his own tow truck for a while. He was a “gear head” from an early age, and racing was his life long passion. Jabbo started racing at 12 years old and had won many races throughout his life. In the early 2000’s, after Nathan Davis bought the track in Holly Springs, Jabbo was contacted by Nathan to manage the track, a job which Jabbo poured his life into. Even though he managed the track, he never gave up racing himself. When Jabbo wasn’t at the track, he loved fishing and sports, especially baseball and football.

There will be a special memorial service at the Holly Springs track 2:00 PM on Friday February 11, 2022.

Jabbo was preceded in death by both of his parents.