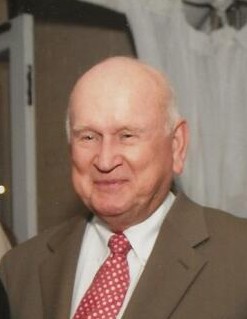 Harold Andrew White died at his Tupelo residence on Tuesday, Feb. 15, 2021 after a period of declining health and a fall on this past Thursday.  He was 94 years old. Harold was born on April 8, 1927 in Tishomingo County, Miss. to the late Fred Jackson White and Martha Ellon Tessenner, who died when he was 8.  The White family relocated to Tupelo in the post depression years and lived here the rest of their lives.  Harold graduated from Tupelo High School and married Jere Ann Boyd White on Aug. 15, l950. Jere Ann, a successful real estate salesman died on July 7, 2017.  Harold began his working career as a newspaper man.  He first worked as an adult for L. P. McCarty Company and later founded White Oil Company, a petroleum distribution company he operated many years before selling it in the l980’s.  He and Jere Ann opened a successful children’s clothing store, the LolliShop for many years. Harold had a strong work ethic and enjoyed all his years of working.  A great storyteller, Harold enjoyed conversation with anyone.  He was a longtime time active and faithful member of the Gloster Street Church of Christ and was the oldest living Elder at the time of his death.

A service celebrating his life will be held at 11 AM Friday, Feb. 18, 2022 at the Sadie Holland Memorial Chapel of Holland Funeral Directors-Tupelo with Minister Chad Ramsey officiating.  Private burial will follow in Tupelo Memorial Park.  Visitation will be from 9:30-service time Friday only at Holland Funeral Directors which is honored to be serving their friends.  For those unable to attend, the service may be viewed at www.hollandfuneraldirectors.com/Livestreaming at 11 AM Friday and permanently archived thereafter.

Harold is survived by his only son, Tommy White (Tawana) of Tupelo; his only grandson, Andrew White of Houston, Tx.; a brother, Freddy White (Wanda) of Guntown; numerous nieces, nephews and their families.  He was preceded in death by his parents; Fred and Martha and his step mother who helped raise him, Mary White, his wife, Jere Ann and his siblings.

Memorials may be made to Gloster Street Church of Christ, 307 North Gloster St.,Tupelo, MS. 38804