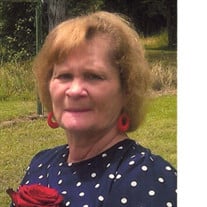 Mrs. Sherree Dill Harris, 74, passed away on February 23, 2022 at North Mississippi Medical Center in West Point. Sherree was born on January 31, 1948, in West Point, the daughter of the late Louis Jackson "Jack" and Maggie Aycock Dill. She was a homemaker. She was a loving wife, mother grandmother, sister, and friend. She married Carl Harris on June 3, 1967, in West Point and he preceded her in death on January 26, 2011. She was of the Baptist faith.

Graveside services will be on Sunday, February 27, 2022, at 2:00 P.M. from Palestine United Methodist Church Cemetery in Montpelier with Dr. James Towery officiating. Calvert Funeral Home of West Point is honored to be entrusted with the arrangements.

Pallbearers will be her sons: Stephen and Tommy Harris, her grandsons: Bo Louis, Jackson and Mason Harris, and her nephews: Wayne Hannah and James Melcher.