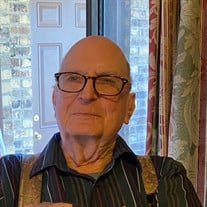 Mr. John William Watson, age 92, of Cedar Bluff, passed away at his home in Cedar Bluff on Monday, February 28, 2022. John was born on Thursday, February 6, 1930, in the same house that he passed away in. He was born to the late John Alexander Watson and Hattie Bell Donahoo Watson. He was a Veteran of the United States Army, being stationed in Japan. He retired as a machinist from Babcock and Wilcox in 1985 after 32 plus years of service. He was known to the community as Big John or Uncle John and was loved by all that knew him. He enjoyed making hot sauce, pickles/pickled okra, sweet potato pies and homemade wine.

In addition to his parents, he was preceded in death by two sisters, Mildred (T. J.) Rodgers and Margaret (Max) Colbert, and one brother, Corkey (Joy) Watson, four half sisters, Winnie Golson, Juell Wilson, Louise (Luke) Watson and Frances Lloyd and one half brother, James A (Snook) Watson, two nephews Mark Colbert and Tommy Rodgers, and a niece, Kim Rodgers.