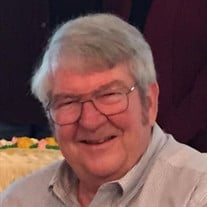 A lifelong resident of the Golden Triangle area, Billy was born May 27, 1951, to the late William Henry Harris and Wanda West Harris of West Point. He attended West Point High School and Mississippi State University, graduating with a bachelor's degree in journalism.

Billy is survived by his beloved wife of 52 years, Emily Smith Harris. Through thick and thin, illness and health, they traveled life's journey with God's guidance and Billy's dry humor.

He is also survived by two sisters, Marie Harris Lambeth of Gulfport and Carol Harris (Robert) Lummus of West Point, and a brother, Edgar Harris of West Point.

A third-generation newsman, Billy followed his family's footsteps into the business, ultimately serving as publisher of the (West Point) Daily Times Leader and the Starkville Daily News.

Billy loved God and he loved music. He was a co-founder and music director of Riverside Chapel Baptist Church, where he truly enjoyed using his musical talent to serve and praise the Lord.

We will miss Billy's voice and his jokes, his shy grin and his wise advice. And we will be listening for a new baritone in God's heavenly choir.

Due to family health reasons, a memorial service will be scheduled at a later date. Calvert Funeral Home in West Point is assisting the family with arrangements.