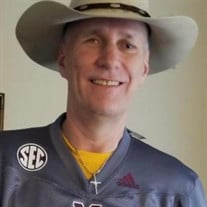 Tupelo, MS (formerly of Aberdeen) – Mr. Andy Buck Wright, 57, passed away on March 13, 2022 at his residence in Tupelo. Andy was born on January 29, 1965, in Aberdeen, to the late Buck, Jr. and Joyce McKee Wright. In his earlier years, he enjoyed racing cars and riding horses. He was of the Baptist faith.

In addition to his parents, he was preceded in death by a brother, Jason Wright.