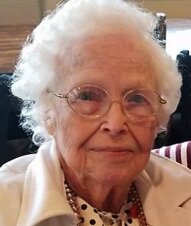 Hazel was born on September 22, 1922 in Starkville, Mississippi. She lived most of her life in Barry, Texas with her late husband Roy, who was a farmer. One of her greatest joys was cooking for her family and having her grandchildren come visit.

Her family would like to thank Carrington Nursing Home for the special care given to Mrs. Thomas.