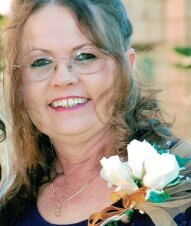 Sherry Mae Hall (Thrasher), 59, of Sturgis, MS received her Heavenly healing after a 2-year battle with lung cancer on February 27, 2022, in her home surrounded by family.

Sherry was born on November 5, 1962, in Wilson, AR to Berlon and Gayle Thrasher. Sherry grew up in Northeast Arkansas graduating from Luxora High School in 1981. She later moved to Sturgis, MS in 1996.

Sherry enjoyed spending time with her family and friends, trucking, crocheting, going to “the river” in Hardy, AR, and most of all spending time with her grandsons. Sherry is best known as Mawmaw which is the title she held best. She was a truck driver and dispatcher for Volume Freight for 18 years and a member of Friendship Baptist Church.

She is preceded in death by her grandparents, James and Vola Clifton and Emmitt and Maybell Thrasher; sister, Theresa Thrasher; and nephew, Joshua Bryant.

Sherry’s celebration of life will be held Thursday March 3, 2022 at Friendship Baptist Church in Sturgis, MS, visitation beginning at 10:00 a.m. with the service immediately following. There will be no graveside service.