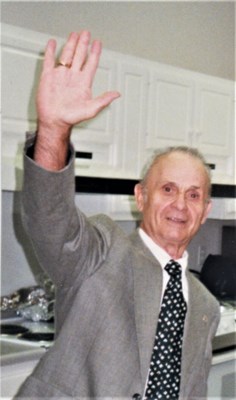 Master Sergeant Walter J Pietruszkiewicz, USMC, Retired passed away peacefully after a brief illness on Thursday, March 31, 2022 while at his daughter, Terry’s home. He was 94 years old. He was born on July 9,1927 to Peter and Catherine Pietruszkiewicz, Polish immigrants that came to America and settled in Boston, Massachusetts in the 1920s.
“Pete” proudly served in the Marine Corps for 28 years. He fought in the Korean conflict. He served his country with pride and honor. Once a Marine, always a Marine. Semper Fi!

He faithfully attended Mass at St Francis of Assisi Catholic Church in Booneville until his health declined.

His retirement years were spent catching fish in his backyard pond when he lived out east of Booneville. He enjoyed mowing the church yard and his own yard. He mowed his own lawn up until the age of 93. He refused to use a riding lawn mower. In his later years he would go to the local gym and work out. He looked forward to the monthly Bingo games at the community center. He enjoyed the NFL. He was a die hard New England Patriots fan. He loved watching Tom Brady play, even when he moved to Tampa Bay. He loved listening to music, especially the big bands and the American tenor, Mario Lanza. Until his eyesight failed, he either had a book in his hand or a word puzzle.

He was preceded in death by his parents, his loving wife of 64 years, Ludie Whitlow Pietruszkiewicz, his sister, Helen Getek, his sweet niece, Joanne Getek.

Visitation will be Monday, April 4 from 5-7pm at St Francis of Assisi Catholic Church in Booneville. A Mass of Christian Burial will be Tuesday, April 5 at 11am. Burial will follow at Candlers Chapel.

In lieu of flowers donations may be made to St. Francis of Assisi Church.