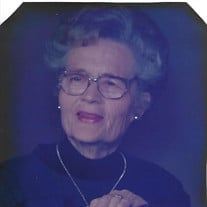 Bobbie Jean is survived by her daughter, Carla Dobbs and son-in-law, David Dobbs, of Bainbridge, Georgia; granddaughter, Nina Cathleen Kimball, her husband, Jason Kimball, and great-grandson, Linus Kimball of Atlanta, Georgia. She is also survived by her sister, Mavis Stanley Shirley (Bob) of Jackson, and her brother Steve Stanley (Kay) of West Point; and numerous nieces and nephews.

In addition to her parents, Bobbie Jean was preceded in death by her husband, Richard B. Hazelwood; and her siblings, Mildred Stanley Katz, Sarah Stanley Young, and Sonny Stanley.

A joint graveside service will be held for Bobbie Jean and Richard Hazelwood at Greenwood Cemetery in West Point on Saturday, April 9, 2022, at 11:00 A.M. Calvert Funeral Home of West Point is honored to be entrusted with the arrangements.