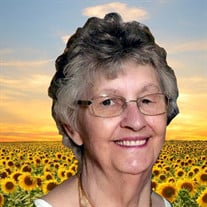 Hazel Green Johnson, age 82, of Water Valley, MS went to her eternal home Sunday, April 10, 2022 at her home with family by her side. One of five children, she was born May 28, 1939, in Water Valley, MS to the late Richard “Simp” and Christine (Boydston) Green. Hazel was a very gentle and kind woman who had a servants heart. She served her country for a short time in the United States Air Force and then began her civilian career serving as the Secretary of Foster Grand Parents Program at the North Mississippi Regional Center in Oxford, a job from which she would retire. Hazel was also a charter member of Woodland Hills Baptist Church in Water Valley where she served in many capacities such as church secretary for over fifteen years, singing in the choir, help organize vacation bible school, and served on the outreach committee. When she wasn’t working or serving the church, she loved sewing and, above all else, spending time with her grandchildren whom she dearly loved.

Visitation is planned for Tuesday, April 12, 2022, in the Gardiner Room at Seven Oaks Funeral Home from 9:30 AM until 11:00 AM. Services will immediately follow at 11:00 AM in the Henry Chapel of Seven Oaks with Bro. Billy Childs officiating. Burial will be in Camp Ground Cemetery.

As well as her parents, Hazel was preceded in death by one son, Donald Johnson; one brother, James Green; and two sisters, Mary McCullough, and Peggy Cummings.