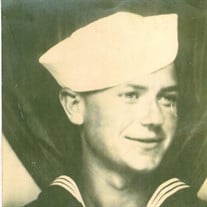 Garland Hunt, of West Point, went home to Heaven on April 9, 2022, at the age of 97 at home. He was born in 1924 at the height of the Roaring 20”s in rural Oktibbeha County near Sturgis, Mississippi to Earl Maben Hunt and Martha Adelaide Sharp Hunt. He spent his school years during the worst of the Great Depression. After the 8th grade, he tried his hand as a sawmill worker, field hand, carpenter, milk delivery man among other various jobs in and around Sturgis and Starkville. At the age of 18, he married his sweetheart, Perval E. Sanders, on April 24, 1943. Three months later, Garland enlisted in the United States Navy and served his country in the amphibious forces. He was a pilot in the division of Standard Landing Craft Mechanized (LCM) Higgins boats at San Diego, California, and Florida Island in the Solomons and then Manus Island in the Admiralty’s, South Pacific. He was on hand during the Admiralty Islands invasion and retaking campaign of Los Negros and Manus Islands off New Guinea, including gaining control of Seeadler Harbor and witnessed firsthand the explosion of the ammunition ship, USS Mount Hood. Garland received the American Area Campaign Medal, Asiatic Pacific Campaign Medal with Star, Asiatic Theater Ribon-Pacific, and the World War II Victory Medal. He returned home to his wife and baby daughter Marie in Mississippi via Seattle, Washington in December 1945. Secretary of the Navy, James Forrestal, completed Garland’s active service on January 31, 1946. Putting the war behind him, he was a gentleman farmer while taking courses in Horology at Clarksdale College. He graduated September 26, 1950. In 1953, he began working at the West Point Babcock and Wilcox plant. In 1954, Garland moved his wife, young daughter, Marie and son, Buddy to West Point where he also worked at Rowell’s Jewelry. He worked as an inspector at B&W until his retirement in 1988 after 35 years. For a period he then worked with his daughter Marie and her family at their company, Poindexter Manufacturing, Inc.

A gentle, humble man, Garland wanted no recognition for his sacrifice and contribution during World War II. An avid photographer, he captured his family’s history through his thousands of snapshots. He had a down home sense of humor and his country-isms were a source of family glue. Garland loved his family fishing trips and he was a passionate deer hunter.