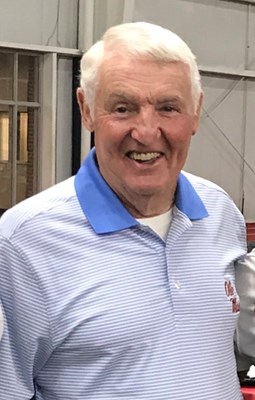 Tommy Harold Patterson of Pontotoc, MS, passed away at his home early Monday morning, April 11, 2022. He was born to in 1946 to Loyd Wayne and Ora Faye Dunnam Patterson and grew up in Ripley, MS, though he was fond of telling people he lived in Hatchie Bottom until he was 10. He was baptized at age 14 at Springdale Baptist Church and never wavered in his belief in his Savior or eternal life. He married Patsy Montgomery of North Carrollton, MS, in 1970.

He graduated with his beloved classmates from South Tippah High School in 1965, having played whatever sport was in season. He attended Missis-sippi College on athletic scholarship, lettering in both football and baseball. As much as he enjoyed his days at MC and the friends he made there, he came to love all things Ole Miss and followed football, baseball, and bas-ketball there as long as he was able. For 30 years he and Patsy set up in The Grove in true Rebel fashion with the Sandroni, Darnell, and Winter families, celebrating wins and mourning losses.

After having coached high school sports and taught math for more than 10 years in Franklinton, Louisiana (where he & Patsy welcomed both their children), Kossuth and Pontotoc High Schools, he began work in manage-ment at first with Phil Jones at Brookwood and then at Action/Lane, where he was human resource manager for 27 years until he retired. He was an Alderman for the City of Pontotoc for five terms. He also refereed basket-ball for 33 years and football for 26. He was known as Coach by many and was often greeted with, “I know you. You called a foul on me one time for….” To this he would laugh and reply, “Well, you shouldn’t have done it.” A faithful member of FBC since 1979, he served through the years in the jail ministry and as a deacon and Sunday School teacher.

He was predeceased by his parents and his stepmother (Stella Hall Patter-son). He is survived by his wife Patsy, his daughter Sidra Winter (Michael), his son Hunter (fiancee Christi Hamblin), his brother Tony (Debbie) of Cot-ton Plant, one nephew, and one niece.

The family plans to celebrate his life during a visitation Tuesday, April 12, from 5:00-8:00 at First Baptist Church Pontotoc Fellowship Hall. The funer-al service will follow Wednesday, April 13, at 11:00 in FBC sanctuary. Browning Funeral Home was honored to assist the family.

The family is grateful to all those who have prayed and offered support, to Sanctuary Home Hospice, and to his sweet sitter, Margaret King Bynum.

Donations can be made to Sanctuary Hospice, Tupelo; First Baptist Church Pontotoc; or the school sports program of your choice.