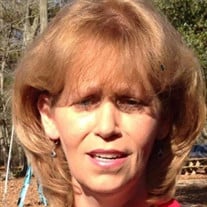 Paula Leanne Rickard passed away on Saturday, April 16, 2022, at North Mississippi Medical Center in West Point, after a long battle with liver cancer.

Paula was born on September 29, 1965, in Oregon, the daughter of the late Harry and Barbara Cook. She worked as a cook at the Tin Lizzie Cafe in West Point.

She is survived by one son, Ashton Rickard.

A Memorial Service will be held at a later date. Calvert Funeral Home of West Point is honored to be entrusted with the arrangements.