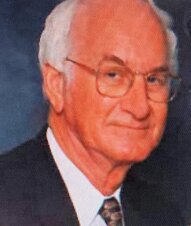 Grady Troy DuBose, age 86, went to be with the Lord at Generations of Vernon on Wednesday, April 20, 2022. Grady was born October 12, 1935, in Crossville, Alabama to the late John Hosea DuBose and Addie Harrison DuBose. Grady has been married 65 years to the love of his life, Dorothy Jane Pennington DuBose.
Grady graduated from Lamar County High School. Afterwards Grady worked for Fayette Grain and Feed, then for A & P Grocery, then worked for Piggly Wiggly traveling to their stores as a Produce Manager/Counselor.

An important part of his life was marked by love for his grandchildren, Trevor, Lauren, and Casey. His joy became evident when they were with he and Dorothy. When “the doors were open” at Calvary Baptist Church n Starkville, MS, Grady could be found worshipping and praising God. He served there in the capacity of Deacon. Grady took the life as a Child of God with him into the workplace or wherever he went. Grady enjoyed his retirement in Starkville with his much-loved wife Dorothy. In November of 2021, he and Dorothy became residents of Generations of Vernon.

Visitation is scheduled for Sunday, April 24, 2022 from 2:00-3:00 p.m. at Welch Funeral Home in Starkville, MS, with the funeral service immediately following in the funeral home chapel. Interment will be in Memorial Garden Park, Starkville, MS. Officiating will be Dr. Grant Arinder and music by Glenn Jackson

In lieu of flowers, the family has requested that donations be given to Calvary Baptist Church,
405 North Jackson St, Starkville, MS 39759

In Appreciation On behalf of the family, we wish to express their gratitude for your many kindnesses evidenced in thought and deed and for your attendance at this service. A special thanks to the Nurses, CNA’s doctors, and other staff at Generations of Vernon for your care, love, and kindness.