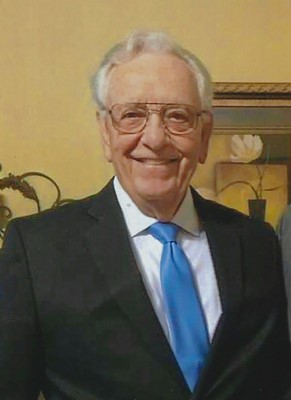 Joel Hale of Pontotoc, MS passed away peacefully at Sanctuary Hospice House, Tupelo on April 30, 2022. He was surrounded with the love and prayers of family and friends.
Joel was born in 1937 to Charlie Bazil Hale and Ora Lucille Montgomery Hale and raised in the Hurricane Community of Pontotoc County alongside his 3 brothers. He graduated from Hurricane High School in 1955 and remained fast friends with his graduating class. He attended Itawamba Junior College 1956-57 where he played baseball, was a member of the yearbook staff, and active in the Baptist Student Union.
He married his wife of 63 years, Shirley Jo Parrish in 1958 and they raised 2 daughters in the city of Pontotoc. Joel served in the 108th Armored Cavalry, Pontotoc National Guard for 6 years and he retired from the Pontotoc Postal Service in 1993 after 25+ years of dedicated service. The Post Office was a second home to him, and his fellow employees were dear friends for many years.
Joel was an active member of First Baptist Church and the Pontotoc community. He taught Sunday School & Training Union and served many terms as a deacon in the church. He was a long-time member of the choir and Men’s Quartet and was also a proud member of the Renegade Sunday School Class. He volunteered with Pontotoc Parks and Rec, coached Little League and American Legion baseball, and was a member of the Jaycees. He enjoyed many years as a basketball referee and baseball umpire for regional high school sports.
Joel spent his retirement years working part-time at the Tupelo and Pontotoc Country Clubs and playing with his golf buddies on as many courses as possible. He traveled with friends and family across much of the US, loved cheering on the Ole Miss Rebels, hunted quail and pheasant, and spent many hours tending to his beautiful tomatoes and flowers. You could often find him fishing on his pond or walking the well-worn paths of his homestead which was truly his favorite place on this earth.
Joel is pre-deceased by his parents and his brother, Eudean Hale.
He is survived by his wife, Shirley, his daughters Harriet Neal of Oxford and Jennifer Zemaitis (Greg) of Wildwood, MO. He was blessed with 4 grandchildren Darby Garner (Luke), Haley Neal, Joelle and Nicolas Zemaitis and great grandchildren Matt, Aaron, Rachel and Rider who is expected to join the family July, 2022. His surviving siblings are Zane Hale (Glenda) of Hurricane, Jackie Hale (Jo) of New Albany and Sister-in-Law Bobbie Hale of Hurricane. Joel and Shirley’s close family includes 8 nieces and nephews and their children. He has many cousins in the Montgomery and Hale families who have remained his dear friends throughout life.
The family hopes you can join them in a celebration of his life during visitation on Monday, May 2nd from 5:00 to 7:00 at the FBC Pontotoc Sanctuary and during a Service of Remembrance on Tuesday, May 3rd at 11:00 in the FBC Sanctuary. Please come as you are or as you would be when spending time with Joel.
Pallbearers will be Ronnie and Keith Hale, Scott Hale, Jay Hale, Roger Smith, Tim Laprade, , Bart Todd, Don Moroney and Chris Hale.
Honorary Pallbearers are, Trey and Easton Smith, Keegan and Dustin Todd, and Drew and Wyatt Moroney.
Ushers will be, Mike Montgomery, Sam Dowdy, Wyliss Kemp, AM Norwood, Ellis Reeder and Jody Stringer.
Donations in lieu of flowers can be made to Sanctuary Hospice House in Tupelo, First Baptist Church of Pontotoc, or the charity of your choice.