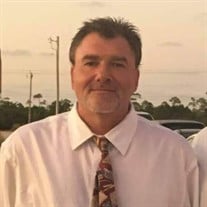 William "Bill" Heineck, 53, passed away peacefully on Sunday, June 12, 2022, surrounded by his family. He began his life in Wisconsin and moved to Mississippi with his family in the 80’s. The most important thing to him was his family, and he was a strong protector and provider. He married his first wife, Diana Canizaro and had 2 wonderful sons, Logan and Landen. He started his career at Clark Beverage Group in 1989, and through his 33 years there “adopted” many that he became a father figure and teacher to. He was well loved and respected by his customers, the owners, and co-workers throughout his career. In 2010, he married Wendy Hagler and became a stepfather to her son Gavin. He was incredibly talented and creative in displays he built at work and enjoyed building things at home as well. He loved animals in general and the labs he had in his earlier years were his heart and soul. Duck hunting was a passion when he was younger and enjoyed raising saltwater corals and fish in more recent years. He took wonderful care of his mother before her death and loved his brother dearly. In 2018, he became a grandfather to Copelynn, who shares his love for fish.

Survivors include his wife, Wendy Heineck of Starkville: his sons, Logan Heineck (Caitlyn) of Foley, Alabama, Landen Heineck (Daniel) of Starkville, and Gavin Edmonds of Tupelo: one granddaughter, Copelynn Heineck, and one brother, George Heineck (Judy) of Southaven.