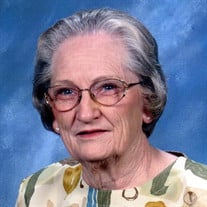 Tillie Shelly Taylor, age 90, of Coffeeville, MS began her eternal journey Thursday, June 16, 2022, at her home surrounded by those she loved. She was born February 10, 1932, in Attala County to the late Gus and Annie Bell (Jenkins) Shelly. Tillie was a tender and loving spirit who impacted those around her. Tillie was very involved while in school where she lettered in basketball playing forward. She also graduated as her class salutatorian. After school she attended business school in Memphis to learn the many aspects of clerical work, talents she would use to keep the books for her husband Donald’s business. Tillie was also a homemaker, instilling traditional values to her children. Not only was she a wonderful mother, but also a care giver for her grandchildren as they were growing up. Tillie loved The Lord, and was a avid member of First Baptist Coffeeville, where she attended until her health began to fail. As a talented seamstress, Tillie loved spending time quilting, as well as making clothes for herself and family members. She also enjoyed spending time tending to her vegetable and flower gardens.

Visitation is planned for Monday, June 20, 2022, in the Gardiner Room at Seven Oaks Funeral Home from 5:00 PM until 8:00 PM. Services will begin at 10:30 AM, Tuesday, June 21 in the Henry Chapel of Seven Oaks with Brothers James Young and Ken Salley officiating. Burial will be in Memory Gardens in Memphis, TN.

As well as her parents, Tillie was preceded in death by her husband, Donald Taylor Sr; one son, Shelly Taylor; two brothers, Edwin Shelly, Rev. Gus Shelly; one sister, Martha McCrory; and one grand-daughter, Leslie Masters.