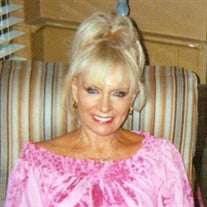 Amory – Judy McCary Wright, 78, passed away on Wednesday, June 21, 2022 at the North Mississippi Medical Center in Tupelo. Born on July 4, 1943, she was a twin daughter to the late William Vardaman and Dimple Florence Copeland McCary.

Judy was a 1961 graduate of Amory High School and went on to further her education at Itawamba Junior College. While at both Amory High School and IJC, she and her twin sister, Jane, were talented majorettes with the marching band. She often referred to her twin sister Jane, as “Twin A”. A lady with the gift of gab and a natural socialite, she went to work at American Airlines for over 5 years as a Flight Attendant. Her family said she was the picture perfect airline stewardess who always looked and dressed to the T. During her career, she met many the famous people and traveled all over the United States.

She met her husband, Captain Charles “Chad” Wright and it was love at first site. They were married in 1969 right before he was deployed to Vietnam. They were blessed with three children during their lifetime, a set of twin daughters and another daughter. She was a member of First United Methodist Church, had a bubbly personality and would talk to anyone. She never met a stranger and always took interest in those around her, taking time to ask about them and life. She had “fur babies” dogs and cats that she loved dearly.

Family and friends meant the world to her and she cherished time spent with each one of them. In addition to her daughters, she was close to her sisters, brother, and their families, as well as her dear companion, Morris McCain. Judy never missed a family occasion. In her free time, she liked to listen to anything Elvis or Wayne Newton.

Her bubbly personality, contagious smile, and joyous presence will be missed forever by those who knew and loved her.

In addition to her parents, she was preceded in death by her husband, Captain Charles “Chad” Wright; sister, Joean Harlow; and daughter, Terri Sanchez.

Donations in Lieu of flowers may be made to Amory Humane Society.