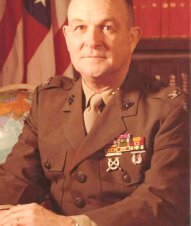 He was a graduate of Starkville High School and Mississippi State University, Class of 1951, where he was a member of Sigma Phi Epsilon. He was a four-year baseball letterman and pitched on the 1948 and 1949 Southeastern Conference Champion baseball teams. He was a member of the MSU Alumni Association, MSU Bulldog Club and served as a past president of the MSU Alumni lettermen “M Club.” He was inducted into the Mississippi State Sports Hall of Fame in 2005. One of his proudest moments was witnessing Mississippi State’s Baseball Team win the College World Series in 2021.

Colonel Johnson joined the Marine Corps in April 1952, and was commissioned a Second Lieutenant in September, 1952. During his career he held a number of significant command and staff assignments to include Commanding Officer of the Second Battalion, 9th Marine Regiment; Chief of Logistical Plans and Operations at the NATO Southern Command, Allied Forces Europe, in Naples, Italy; and, Chief-of-Staff, Fleet Marine Force Europe, in London, England. He was a graduate of the Naval War College in Newport, Rhode Island, and the Marine Corps Amphibious Warfare School in Quantico, Virginia. He served in the Vietnam War with the Seventh Marine Regiment and Third Marine Division. His personal decorations include the Legion of Merit with Gold Star and Combat “V” for valor, the Meritorious Service Medal with two gold stars for subsequent awards, the Navy Commendation Medal with Gold Star and Combat “V”, the Vietnam Cross of Gallantry with Palm and the Navy-Marine Corps Combat Action Ribbon. He retired from active duty in 1982 but continued a keen interest in Marine Corps affairs. He was a life member of the Veterans of Foreign Wars. Following military retirement, he became the Executive Director of the Starkville Housing Authority until his retirement in 2006. Under his direction the Starkville Housing Authority was the recipient of numerous local, state and national awards. He was a past President of the Mississippi Association of Housing and Redevelopment Officials and served on the executive board of that organization for ten years. He also served on the executive board of the ten-state Southeast Regional Council of the National Association of Housing and Redevelopment Officials for seven years. A Life Scout and longtime Adult Scout Leader; he was the recipient of the Silver Beaver Award from the Pushmataha Council, Boy Scouts of America.

Visitation is scheduled for Monday, June 27, 2022 from 9:30-10:30 a.m. at First Presbyterian Church in Starkville, MS, with the funeral service immediately following. Rev. Bob Whiteside and Dr. Martin Lifer will conduct the service. Burial will be in Oddfellows Cemetery.