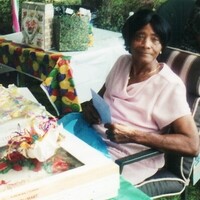 Born on June 27, 1923, to the union of the Alonzo and Clara Dillard Castleberry; she was the youngest of six children.  She was preceded in death by her parents and her siblings (Henrietta Green, Iva Prude, Mae Katherine Walker, Viella McCoy, and Sim Castleberry.)

In July 1940, Ceola was united in marriage with James Henry Green.  This union was blessed with ten children. Her husband, James, and four children (Annie Ruth, Louise, Charles, and Frank James) preceded her in death.

Ceola was a homemaker while her children were young, she was well known for her great cooking and love of gardening. She was a pillar of strength for her family, a loving wife, and a mother.

Ceola received her education in the Mississippi Public School System. In the 1970's Ceola began working for the Traceway Manor Retirement Home. She worked for 20 years and was given an award for her long-standing dedication to her work. She was also a long-term member of the Victory Court #68.

She gave her life to Christ at an early age; and was united in worship at the Big Hill United Methodist Church. Later in her life's journey, she rededicated her life to the Lord. She served faithfully with her church family until her health began to fail. Ceola's wonderful personality and spirit showed through her beautiful smile. Ceola extended hospitality and compassion to all who came to her home.

To send a flower arrangement to the family of Ceola Castleberry Green, please click here to visit our Sympathy Store.