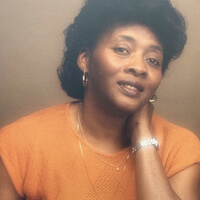 Lorine was born on April 12, 1935, in Pontotoc, Mississippi, to the late James Buchanan, Sr. and Lucille Elzie Buchanan.

Lorine accepted Jesus Christ as her personal Savior at an early age.  She was a member of Mount Pleasant Baptist Church in Chesterville, MS. She later joined Rising Star Missionary Baptist Church in Tupelo, MS under the leadership of the late Reverend James Wilson.  Rising Star is currently under the leadership of Reverend Melvin Lewis where she remained until her health failed.

Lorine was an active member of the church.  She served on the VIP Ministry, Women on a Mission Ministry, Golden Choir, President of Usher Board, Birthday Club and Sisterhood at Rising Star.  She was a member of the Easter Star and Henry Hampton Elk Lodge. She was the Den Mother for Cubs Scouts for her youngest son’s troop.

Lorine was united in holy wedlock on January 14, 1951 with Jesse Dabbs Westmoreland and unto this union five children were born.

To send a flower arrangement to the family of Lorine Buchanan Westmoreland, please click here to visit our Sympathy Store.