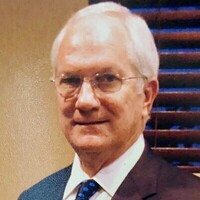 William Phillip Johnson, Jr. was peacefully called home to his Lord and Savior on June 28, 2020 in Castle Rock, Colorado. He was born on December 28, 1937, in Bay City, Texas, to parents William Phillip Johnson and Penola Jones Johnson who preceded him in death along with a sister, Coleen Mae Johnson Junge.

Phillip was raised in Van Vleck, Texas, and graduated from the University of Texas at Austin with a Bachelor of Business Administration in 1960. He was a veteran and proud member of the U.S. Army. He began his career as a national bank examiner for the Office of the Comptroller of the Currency, ultimately becoming the Regional Manager for a significant portion of Texas.

Phillip continued his distinguished career in banking as an Executive Vice President at South Main Bank and later charted Citizens National Bank in 1979, which subsequently became Houston Community Bank. As a testament to his stalwart leadership, conservative banking principles and steady vision, Houston Community Bank grew and prospered, expanding to include five branches across the greater Houston area.

He was an exceptional banker and managed the bank to profitability every year, navigating challenging financial times in the 1980s and following recessions, as well as consistently being recognized among the top 10 in ROI performance of banks in Texas. His hallmark achievements were many, including being honored by the American Bankers' Association in 2011 for 50 years in the banking industry. Capping off his esteemed career, in 2014 he sold Houston Community Bank to Independent Bank Group.

In retirement, he enjoyed time with his family and relaxing at his home in Colorado. He was a voracious reader and a man of deep faith who found fellowship with his Sunday school class for decades.

Phillip loved his family and prioritized helping, teaching and encouraging his sons and grandchildren. He was a dedicated member of Second Baptist Church of Houston and was committed to raising his children in a Christian environment. He was deeply loved and will be greatly missed.

Grave-side services will be at 11:00 a.m. Tuesday, July 7, 2020,  at Itawamba Memorial Gardens in Itawamba County, Mississippi. A Memorial service will be held in Houston at a later date. In lieu of flowers, contributions can be made to Second Baptist Church of Houston, Cal Farley's Boy's Ranch, or Meals on Wheels.

To send a flower arrangement to the family of William "Phillip" Johnson, Jr., please click here to visit our Sympathy Store.