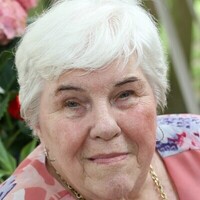 Ilse Bock, 87, has left our world, after a long struggle with recent health complications, and has begun her new life in heaven.  She fought hard but lost her battle on July 15, 2020.  Born in the Altona district of Hamburg, Germany on September 19, 1932, she was the daughter of the late Karl and Agnes Jansen. Ilse, in her youth, was an avid gymnast who once qualified for the German Olympics Team.  She graduated from the Paris Loreal School of Beauty and was a much-loved hairdresser/beautician in Hamburg that carried over to her life in the states.  She met her future husband, Hans Joachim Bock, in Hamburg after he left his East German homeland to pursue freedom. He was a motorcycle cop and later a master tool and die maker in the German Sieman factory.  She married her one and only love on August 28, 1954 and they were blessed with one daughter. On May 17, 1966, she, along with daughter Caroline, immigrated to the USA, after Hans had already secured a position through a firm in New York that placed him in Tupelo, Mississippi.  Tupelo was the heart of the furniture industry at the time, which put his engineering skills to work.  Ilse soon became a beloved hairdresser in Tupelo. She absolutely loved talking with her customers, cared for them, and many became close, personal friends. She and Hans loved to go out dancing and could entertain the whole room with their amazing moves.  She had an abundance of friends in the Tupelo German Club and was involved in its community activities.  With their love for America, she and Hans both obtained American citizenship in the early 1980’s with the help of the local DAR and their daughter.  She and Hans enjoyed 49 years of marriage before his passing in 2003. Health complications beginning in 2010 caused Ilse to lose both legs over the course of two years, and she was then moved to Memphis to be under closer care of her daughter.  She attended Christ the King Lutheran Church whenever she could, attended Memphis Germanic Club events, and had many family outings she thoroughly enjoyed.  Ilse’s smile and loving presence will be sorely missed by her family and friends from all over.  Memories of her will be cherished forever.  Hans has surely already met her in heaven and there is peace in knowing she will be there with him and her heavenly Father.  She is survived by her daughter, Caroline Bock Johnson (Kenneth) from Memphis, her grandchildren Ryan, Tyler, Nolan and Meredith Johnson (fiancé Cameron Reynolds), her brother Georg Jansen (Jois) from Hamburg, and a number of nieces and nephews in Germany and the States.  She was preceded in death by her loving husband, Hans Joachim Bock, and her parents, Karl and Agnes Jansen.  A memorial service will be held at Lee Memorial Funeral Home on Saturday, July 25, 2020, at 11:00am with Pastor Mark Goble of Memphis officiating.  Final resting place will be in Chapel of Faith Mausoleum at Lee Memorial Park.  Honorary pallbearers are Kenneth Lee Johnson, Ryan Everett Johnson, Tyler Scott Johnson, Nolan Kent Johnson and Cameron Reynolds. Visitation with family and friends will be held following the service.  Memorials in lieu of flowers may be made to Christ the King Lutheran Church, 5296 Park Avenue, Memphis, TN  38119.   Plants for her planned memorial garden may be sent to the funeral home or you may contact Caroline for an alternate address.