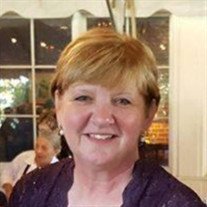 West Point, MS- Roslyn G. “Rosy” Davis, 61, passed away on August 7, 2020 at 277 Clisby Road in West Point. She was born November 11, 1958 in Aberdeen, Scotland to Patricia Kaye and the late Joseph T. Gable. She worked as a Financial Analyst for 34 years at Columbus Air Force Base. Rosy was member of First Baptist in West Point. She married Gary Davis on July 14, 1979 in West Point.

Rosy was a loving daughter, wife, mother and grandmother “Ree”. Some of her favorite things to do were taking her grand kids to the camp house, swimming in the lake, cutting the grass and loved spending time there. She enjoyed catching up and visiting with friends at WalMart and frequenting Dirt Cheap. Rosy never met a stranger and made people laugh and smile everywhere she went. She was known for her positive outlook in every situation. She loved giving and doing for others never expecting anything in return. She had many lifelong girlfriends “sisters” who were family to her. Rosy’s impact on lives she touched will never be fully known.

A memorial service will be held a later date. Calvert Funeral Home of West Point is honored to be trusted with the arrangements.

Survivors include her husband: Gary Davis of West Point; two sons: Justin Davis (Kelly) and Jody Davis (Kendall) all of West Point, two grandchildren: Ali and Carter Davis and her mother Patricia Kaye. Rosy was preceded in death by her father: Joe T Gable and her step-father: Jack Kaye.

Honorary pallbearers are Dr. Brett Miller, West Point High School Class of “76”, her extended family and the nurses and staff at Dugan.