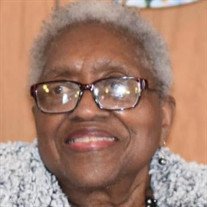 Mary Lucile Hood, daughter of the late Mary and Joe Miller, was born December 15, 1928, in Wren, MS. At an early age she professed her faith in Jesus Christ and joined Union Grove Methodist Church, where she was a dedicated member until her passing.

She was united in holy matrimony to Elijah (Judge) Hood on January 29th, 1950.

Mary was an employee of Red Kap for many years. She also worked at the Friendship House in Aberdeen, MS, where she was famous for her hushpuppies. She was a member of the Homemakers Club and an excellent cook, well-known for her dressing and butteroll. She volunteered at Gilmore Memorial Hospital for several years and was named Volunteer of the Year. She was also a self-appointed caretaker for many of her neighbors in Wren. Her Christian life was as beautiful as the flowers that she loved so well, and her influence will forever remain in the lives of all who knew her. She quietly departed this life Friday, August 7, 2020 at her daughter’s home in the Darden Community. She was preceded in death by her husband, sisters, Oteria Sims and Verneda Dismuke, and son-in-law, E Bernard White.

Visitation will on Monday evening from 4 until 6 p.m. at the funeral home. Funeral services will be private.