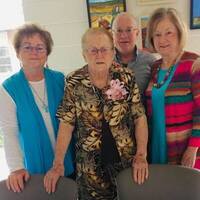 Martha Hipp Dickson, 93, of Bruce passed from this life on Tuesday, August 25, 2020, at North Mississippi Medical Center in Tupelo. Born on June 30, 1927, Martha was a daughter of the late Dwight M. Hipp and Virgie Yancy Hipp.

Martha graduated from Sarepta High School in the early 1940’s. The year 1946 brought about major change in her life, this country girl packed up and moved to the growing city of Memphis Tennessee, a place she would remain until 1990 with many memories made along the way. Martha was employed with Dealers Industrial Power Company as a bookkeeper for an expansive thirty- three years before retiring.  Martha enjoyed taking care of children, and did so with her husband Ray by her side at Ardmore Baptist Church. She further tended to the needs of the Boy Scouts in Memphis Troop #304 as a den mother for thirteen years. As the years passed by Martha and Ray returned home to Bruce, a place they would remain until Ray’s passing and Martha’s move to Traceway Manor in Tupelo. Martha’s home had an open door policy, meaning her door was always open for anyone needing a place to sleep or a meal to eat. When Martha was not looking after the needs of others as she so often did, she could be found playing a hand of cards or navigating through a board game. In addition to her activities, Martha enjoyed genealogy and the knowledge she gained from tracing the family tree. She kept her mind sharp by authoring dozens of letters and poems. This loving lady will be greatly missed by her family, and the many lives she touched along the way. Martha did not simply pass away, she held in her soul the cure to death, a relationship with Jesus Christ. She worshipped Him when she was able at Shady Grove Methodist Church.

The funeral service remembering Martha’s life will be held at 2:00 PM on Saturday, August 29, 2020, in the chapel of Parker Memorial Funeral Home of Bruce with Bro. Lannis May and Bro. Michael Ratliff officiating. David Farag, Brad Lundgren, Justin Lundgren, Ryan Lundgren, Weslee Lundgren, and Trey Ratliff will carry Martha to rest in the Bruce Cemetery.

In lieu of flowers the family ask that memorial donations be given to Creative Learning Center at First Baptist Church of Bruce, P.O. Box 535, Bruce, MS. 38915.

Parker Memorial Funeral Home of Bruce and Vardaman is honored to serve the family in helping make arrangements remembering Martha’s life. Online condolences may be composed at parkermemorialfuneralhomes.com.

To send a flower arrangement to the family of Martha Hipp Dickson, please click here to visit our Sympathy Store.