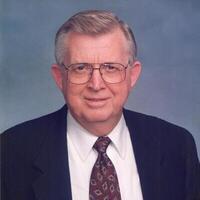 A native of Calhoun County, A.D. was born on November 28, 1932 in the Loyd community of north Calhoun County to Earlie Arthur and Ester Stewart Spratlin.  He was married on March 22, 1958 to Erma Bryant Spratlin of Bruce, where they established their home and longstanding family business, Spratlin Building Supply, Inc., which is still in operation today and is one of the oldest continuing businesses in Bruce.

He was a 1950 graduate of Bruce High School. He graduated from Mississippi State University in 1954, where he served in the Army ROTC, and later served in Germany as a Military Police Officer.  Upon his return to Bruce, he convinced his father to convert the Spratlin Warehouse (feed and seed business) into a building supply. Along with his brother-in-law B.J. Bennett, they started Spratlin-Bennett Building Supply on July 2, 1956, which later became Spratlin Building Supply, Inc., on September 1, 1972.

He was actively involved in the building, construction and growth of Bruce, having undertaken the redevelopment and reconstruction of South Bruce on behalf of the E.L. Bruce Company, along with developing Spratlin-Bennett Subdivision, and Box Subdivision.  After serving as General Contractor for the 1987 renovations to the Kappa Alpha Order fraternity house at Ole Miss, he was surprised to be given a bid and was initiated in 1988.

A.D. was a life-long member of First Baptist Church of Bruce, where he was a life-time deacon and the Sunday School Director for over 25 years. He was a Paul Harris Fellow of the Bruce Rotary Club and served on the boards of BancorpSouth (Bruce), the North Mississippi Medical Center (Calhoun City Hospital) and Blue Mountain College. He was an active member of the community, serving in and contributing to numerous volunteer organizations.  He was honored to serve as the Grand Marshal of the Bruce Christmas Parade in 2012 and was most recently honored by the Bruce Chamber of Commerce as “Citizen of the Year” in 2019.

He was preceded in death by his parents, and his five sisters, Elvira Vanlandingham, Earlene Barnes, Hortense McKelroy, and Bonnie Bennett all of Bruce, and Lois Young (Grenada).  He is survived by his wife, Erma; daughter, Allison McDowell (Roy) of Bruce, and son Art Spratlin (Liz) of Jackson; granddaughter Leigh Allison Moore (Turner) of Bruce, grandsons Matthew McDowell of Memphis, and Aden, Nick and Liam Spratlin of Jackson; and great-grandchildren, Spencer Moore and Addison Moore of Bruce.

The family wishes to express their deep gratitude to the staffs of the North Mississippi Medical Center (Tupelo), the Calhoun City Hospital, the Calhoun City Nursing Home, and to the Hospice Staff at Calhoun City for their special and loving care.  Parker Memorial Funeral Home of Bruce is entrusted by the Spratlin family in honoring A.D.’s life.  Online condolences may be made at www.parkermemorialfuneralhomes.com.

To send a flower arrangement or to plant trees in memory of
Arthur Dennis (A.D.) Spratlin, please click here to visit our Sympathy Store.