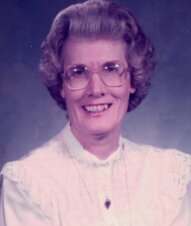 Georgia Marie Rhodes Tramel
Mrs. Tramel, age 95, a resident of Plainview Assisted Living in Richland
Mississippi, passed away surrounded by her family on November 13, 2020.
Mrs. Tramel was born on October 20, 1925. She was a member of the First
Presbyterian Church, in Starkville Mississippi; NORFE organization, an active
member in the National and State officiates of Professional organization, as well
as a member of the Joyful Noise Marker Band.
Mrs. Tramel graduated from University of Southern Mississippi where she earned
a Bachelor’s Degree in Home Economics with high honors and a minor in Science.
She later pursued a Master Degree in Rehabilitation Counselling from Mississippi
State University. She taught high school Home Economics and Science in Neshoba
County. Mrs. Tramel was later employed with Mississippi Cooperation agricultural
extension services as a Home Economist. She also served as a Certified Rehibition
counselor for twelve years. She was named Evaluator of the year in 1982 for her
outstanding work in Rehibition and received an appreciation award for her
outstanding work with the disabled. Mrs. Tramel retired in 1985 to care for her
terminally ill Husband.
Georgia Marie Rhodes Tramel is survived by her son Norman R. Tramel and
Daughter in law, Holly Tramel of Brandon Mississippi
Two grandchildren Jessica Nicole Tramel Parker (husband Justin Parker) and Kate
Marie Tramel Rickis, both from Brandon Mississippi. She is also survived by 3
Great Grandchildren; Berkleigh and Brinleigh Parker, Lake Rickis, and one brother
Dr. L.N. Rhodes of Meridian Mississippi.
A Graveside service will be held Tuesday November 17, at 11:00 AM with Chaplain
Aubrey Chapman officiating. Graveside Service will be held at Memorial Gardens
Park in Starkville Ms. Welch’s Funnel Home will be handling the service.

“I have fought the good fight. I have finished the race; I have kept the faith”
2 Timothy 4:7