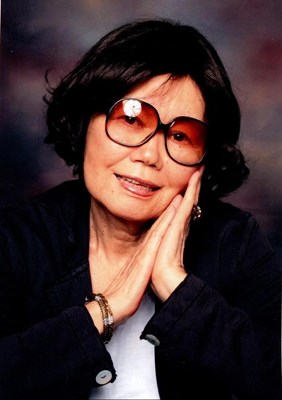 Kim Ok Bae Johnson, born on April 23, 1932 in Osaka, Japan, died peacefully Saturday evening, November 14, 2020. Kim came to the United States from South Korea in 1971 with her new baby, Kimberly, and husband, Utah “Midge” Carl Dooley. Midge had been with Red Cross when he met Kim. Upon arriving in the United States, they moved to Corinth, MS. After Midge’s death, Kim married Mose “Johnny” Eugene Johnson and the family moved to Booneville, MS.

While still speaking broken English, Kim made her home in MS. She quickly fell in love with the kind people and her new American family and combined her Japanese and South Korean culture with her new Southern way of life.

Kim was an immaculate housekeeper and gardener. Her home and yard were a source of pride and passion and it was her pleasure to keep it “magazine worthy”. Many people in Booneville enjoyed driving by the home to admire the yard and ask for gardening tips.

Kim also brought her exceptional Asian culinary skills to MS. Her signature dishes included Kimchi, Yakitori, fried rice, and cucumber “hot stuff”. She also mastered Southern cooking to which she was known for her fried chicken, biscuits and gravy, and cornbread. She was a welcoming hostess to those who were fortunate enough to eat with the family. Whether you were family, friend, or her beloved dog, Leiko, you would be assured to leave happy and full.

Kim was known for her signature style, especially her big glasses and her love of watching Wheel of Fortune and Walker Texas Ranger.

Kim is left behind by her daughter, Kimberly Terrell who now resides in Tupelo, MS and works for Transport Trailer Service, and her three grandchildren who she loved so much: Daniel Lopez of Nashville, TN; Kelsey Federico (Dalton Federico, Staff Sargent for the US Army) of Columbus, GA; Mya Lopez of Bowling Green, KY and friends and family who will dearly miss her.

Visitation is scheduled for Friday, November 20th from 12-2 PM at McMillian Funeral Home.