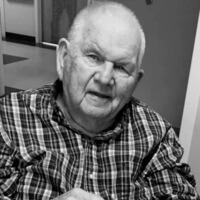 RANDOLPH –   Obern Lamar "O.L." Finley, passed away on November 26, 2020 at a family home in Randolph. He was born January 4, 1928, to Ted Finley and Eula Todd Finley. He went to school at Toccopola. He married Wilma Ward on March 16, 1947 and they spent the next 67 years together. He was a former member of the Pontotoc County School Board, a Farm Bureau board member, and was elected to 2 terms as a member of the Board of Supervisors for Pontotoc County. He was a Christian and a member of County Line Baptist Church where he served as a Sunday school teacher and music director for many years.
O.L. was preceded in death by his wife, Wilma; his parents, Ted and Eula Finley; and his parents-in-law, Delma and Attie (Douglas) Ward. He was preceded by 2 grandsons, Greg Finley and Joe Finley; 2 great grandsons, Landen Finley and Grayson Finley; and 1 daughter-in-law, Kaye Cummings Finley. He was preceded in death by 4 sisters, Melba Smith, Ruby Tutor, Irma Winter, and Dell Ward and 3 brothers, Marvin Finley, Jack Finley, and Gene Finley. He was also preceded in death by 11 brothers-in-law and sisters-in-law.
He is survived by 6 sons, Robert (Bubba) Finley, Sherald (Faye) Finley, Gerald (Kaye) Finley, Billy Finley, Donnie Finley, and Champ (Kim) Finley; 4 daughters, Elouise (Johnny) Angle, Judy (Tommy) Luttrell, Janet (Chad) Sartin, and Joy (Jon) Vanlandingham. He is survived by 25 grandchildren, 49 great-grandchildren, and 9 great-great-grandchildren. He is also survived by 8 brothers-in-law and sister-in-law. And a whole host of nieces and nephews.
Visitation will begin 1PM, Sunday, November 29, 2020 and continue to service time of 3PM at County Line Baptist Church. Bro. Donnie Finley and Bro. Gerald Finley will officiate. Burial will follow in County Line Baptist Church Cemetery. Baldwin Memorial Funeral Home of Pontotoc is in charge of arrangements.
Pallbearers will be his grandsons, Mike and Jason Angle, Lane and Derick Finley, Dusty and Rusty Finley, Trae and Tanner Luttrell, Collin Sartin, and Jeremy Vanlandingham.

To send a flower arrangement to the family of
Obern "O.L." Lamar Finley, please click here to visit our Sympathy Store.