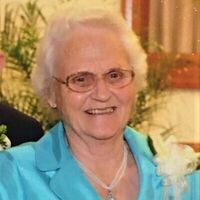 Wilma Pearl (Clark) Turner age 89, after an extended illness, left her earthly home and went to her Heavenly Home to be with her Lord in Glory on 25th of, Nov. 2020.

Born April 23rd, 1931 in Pontotoc County, MS, she was the second child born to parents Henry Clark and Johnnie Busby Clark. Wilma attended Sarepta School from age 4, and left her junior year to marry Billy Turner on Oct. 25th, 1947; and later acquired her GED in 1969. They raised their family of eight children in Banner, and attended Lantrip Baptist Church as long as health permitted. Wilma and Billy were married for 63 years before Billy passed away on Jun 12, 2010.

Wilma surrendered her life to the Lord in the early years of her marriage at Calhoun City First Baptist Church. She and Billy considered themselves community missionaries to the Lantrip community, as they could be found checking on the sick and elderly or carrying meals to them from time to time. They were always looking for things they could do for others around them.

Known affectionately to her grandchildren and others as Momma Turner, she loved All children. She was an excellent seamstress and cook, not to mention her abilities as an organizer, administrator and manager; she served as the doctor, teacher, advisor and took well care of the disciplinary problems. She was truly one to admire, for the love, and sacrifices that only a mother understands, when it comes to her children, she had enough love in her heart for all the children, grands, great grands, and great great grand. She was very fond of animals of all kinds and especially her cats and kittens, which have provided her with many hours of entertainment after she become homebound.

She leaves behind her loving children and their families to honor her memory. Jean (Joe) Pullen of Water Valley, Kathy (Glenn) Doss of Starkville, Deborah (Jerry) Dunn of Bruce, Randy(Carla) Turner of Houlka, Wendy (Larry)Moore of Bruce, and Scott(Frances Snyder)Turner of Banner, 20 Grandchildren and 26 great grandchildren and 1 great great grandchild, also a brother Billy Van Clark of Bruce, a sister Patsy (Charles) Boland of Belden and numerous nieces and nephews.

Momma Turner will never be forgotten, she was a beautiful soul, with a loving smile, always positive and never complained. Her memory will be cherished forever int he hearts of her family and friends.

Her funeral service will be held on Saturday November 28, 2020 at  2:00 pm at Parker Memorial Funeral Home Chapel with grandson  Bro, Will Turner and Pastor, Bro. Robert Alexander officiating. Interment will be in he Antioch Baptist Church Cemetery on Hwy 9, North of Bruce, The family will receive friends, from  1:00 pm until time of the service at Parker Memorial Funeral Home, Bruce, MS.

A graveside service honoring her life will be held on Saturday November 28, 2020 at Antioch Baptist Church Cemetery Hwy 9North of Bruce, with Bro Will Turner and Bro. Robert Alexander officiating.

Online condolences may be made to the family at ParkerMemorialFuneralHomes.com

To send a flower arrangement or to plant trees in memory of
Wilma Pearl Turner, please click here to visit our Sympathy Store.