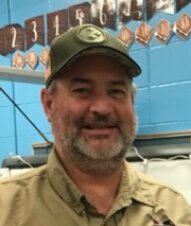 Ronald E. Mitchell (Ron) was born on November 24, 1960, in Topeka, Kansas. He is the only son of Maurice and Caroline Mitchell of McHenry, Ms. The Mitchell’s moved to Starkville, Ms in 1974. Ron graduated from Starkville High School and earned a Bachelors Degree in Computer Science from Mississippi State University. He worked for MSU from 1983 until he retired in 2010 as the director of Information Technologies at the MSU College of Veterinary Medicine. He enjoyed everything MSU sports, but really cherished all the memories he had of his times spent at Dudy Noble Field with friends and family. Most notably, throughout the Starkville community, he was known for his nearly 40 years involved with local youth sports. In the summers you could find him either coaching or umpiring SBA, winter time was split between watching MSU football and chasing the elusive Mississippi Whitetail deer. In the Spring most of his nights were spent in a local gymnasium refereeing SAY basketball. Ron always enjoyed family and friends, but his favorite role in life was the one he had the most passion for, being “PeePaw”. He adored his grandchildren and any time that he could spend with them.
He is survived by his parents, two sons, Brad (Leah) and Will (Laura), grandchildren Bryce, Allie, Hamp and Luke and two sisters Vickie Nodine and Glenda Young, as well as 3 nephews and 1 niece.

Visitation will be held at South Union Methodist Church in Ackerman, MS on December 5 from 1 PM to 3 PM, with a graveside service to be held immediately following at South Union Cemetery in Ackerman. In lieu of flowers, the family requests for donations to be made to the Mississippi Dizzy Dean Scholarship Fund C/O Bret Frey P.O. 5327 MS State, Mississippi 39762.