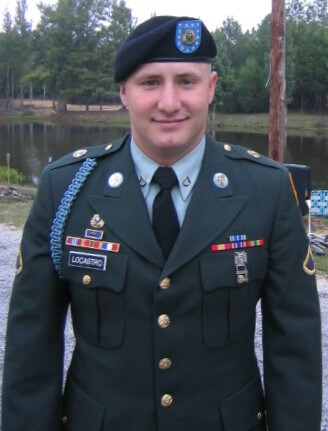 SHANNON – Gabriel Solon Locastro, 38, a distinguished military hero, passed away suddenly on Friday, December 4, 2020 at his family home in Shannon. He was born July 8, 1982, the son of Thomas Joseph Locastro Jr.  and Sharon Kay Young Locastro. Gabriel attended Okolona High School then attended ICC for two years in business administration. He worked for a time in the banking industry. He joined the Army as an infantry soldier in 2004 at Fort Benning, GA. He later served with the 2nd ID in Iraq and the 101st Airborne Division in Afghanistan where he was wounded by an IED and earned many awards for his valiant service in combat. After he retired from the Army he moved to Washington State to pursue his bachelor’s degree in Business Administration and lived there for many years before relocating back to Mississippi. He loved fishing, watching sports and spending time with his family and kids,  especially his little brother Jamie (Ninnie).

A prayer service led by Sis. Liz Brown will be held at 6 PM on Monday, December 7, 2020 at the Okolona Chapel of Holland Funeral Directors. Visitation will be from 4 PM – 6 PM. Burial will be at 11 AM on Tuesday, December 8, 2020 at Corinth National Cemetery in Corinth.