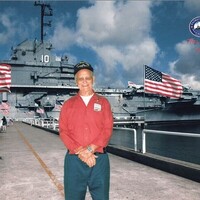 James Stanton Baker, 93, of Bruce departed from this life on December 3, 2020, at Baptist Calhoun Nursing Home in Calhoun City, Mississippi. Born on January 26, 1927 in Tennessee, James was a son to the late Jacob Stanton Baker and Raythel Crenshaw Baker.

James, a Fireman Second Class in the Navy, bravely fought the the Axis Powers during World War II.   This brave solider of the sea served his tour on two ships, USS Yorktown and USS Stockham. As a direct result from his time on both a destroyer and aircraft carrier, James received three campaign ribbons:  Asiatic-Pacific Campaign Ribbon, American Area Campaign Ribbon, and the World War II Victory Ribbon.  With his honorable discharge papers in hand, he returned home in the spring of 1946. Just two years after his return home James faced a major milestone in his life.  He married the love of his life, Mary Schoggin, on December 17, 1948. The couple spent an expansive seventy one year’s eleven months and sixteen days in their union. Those seven decades were filled with two sons and endless memories. James provided for his family as press operator for the Textron Corporation, a job he held until retirement.  James was a faithful member of Rocky Branch Baptist Church.

Parker Memorial Funeral Home of Bruce and Vardaman is honored to serve the family in helping make arrangements remembering James’s life. Online condolences may be composed at parkermemorialfuneralhomes.com

To send a flower arrangement or to plant trees in memory of
James S Baker, please click here to visit our Sympathy Store.