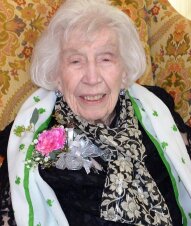 Margaret Murphey Weining completed her 103-year earthly adventure on Dec. 2, 2020, in Starkville, Mississippi. An online memorial service in the near future will honor her life.

Born in Laurel on March 16, 1917, she was the first child of Edward Joseph and Ruth Sammons Murphey. Her siblings were Edward, Herman, and a still-borne sister, Flora Pauline.

Shortly after Margaret was born, her father became the superintendent of Marathon Logging Camp, located in Smith County, her home for most of her first decade. Her father purchased cotton land in the Mississippi Delta in 1927, the year of the Great Flood. Marathon Camp closed in 1929, and the family moved to Indianola, a few months before the stock market crashed.

In 1933, Margaret helped her father, a native of Michigan, drive the family to the World’s Fair in Chicago and to visit his family in northern cities.

After high school, Margaret owned a bookstore in Indianola for one year. She enjoyed reading throughout her life. While working for a telephone company, she took a civil service exam and got a job with the Social Security Administration in Baltimore, earning $1,260 annually.

After Pearl Harbor, they moved to New Jersey, and Bob enlisted in the Army Ordinance Corp. Margaret was pregnant with their first child when she went to stay with her parents in March 1943 and didn’t see her husband again for three years.

During the war, Margaret kept the books for a family with multiple plantations near Indianola. After returning to New Jersey, Margaret traveled all over the state working for the Bureau of Labor Statistics for about 15 years before becoming the church secretary at the American Baptist Church of East Orange. Margaret was an officer with the Essex County American Baptist’s WMU organization.

The Weinings moved to Indianola in 1974 to help with her mother’s care, and then moved to Starkville in 1984. One of the first things Margaret did was write a Letter to the Editor about the need for a Senior Center in Starkville.

They were also very supportive of the Starkville Habitat for Humanity, staffing the original small resale store located behind First Baptist Church beside the railroad track.

Bob died in 2006 after a brief illness. Margaret continued to be active at the Senior Center and First Baptist Church. Eventually, she became involved at University Baptist Church, reflecting her lifelong progressive nature.

During her 36 years in Starkville, Margaret was a member of the National Active and Retired Federal Employees Association, the American Association of Retired Persons, the Starkville Newcomers Club and the Cup and Chaucer Book Club.

Margaret is survived by her four children and their families, including Bob Weining, of Starkville and his three stepchildren: Amy, Gwen and Jim; her daughter, Ruth Jernigan, of Starkville, and her husband, Ed; her son, Ed Weining of Collinswood, N.J., and his wife, Lisa; and her son, John Weining, of Glen Ridge, N.J., his wife, Maureen, and their daughters: Ashley, Jessie and Erin. She also enjoyed many cousins, nephews and nieces.

Memorials may be made to Starkville Habitat for Humanity at www.Starkvillehabitat.com or to University Baptist Church at www.ubcstarkville.org.