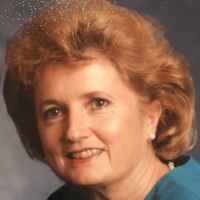 Maxine Jenkins Blue (July 25, 1939 – December 4, 2020) Maxine Jenkins Blue, 81, passed peacefully into the arms of the Lord on December 4, 2020 in Safe Haven at Lennox Park Nursing Home in Atlanta, Ga. after prolonged declining health. She was born on July 25, 1939 in Vardaman, Mississippi and is preceded in death by her parents John Dee and Lillian Harmon Jenkins and her husband of 59 years James R. (Jim) Blue, Sr. Maxine is survived by her children James R. (Jane) Blue, Jr. of Wicomico Church, Virginia and Valarie Blue (Jim) Easterling of Atlanta Georgia; her grandchildren James M. (Kelly) Blue, Christopher (Leah) Blue, Jonathan Blue, Mary Grace Easterling and David Easterling; great-grandchildren Larkin Blue, McKenzie Blue, Victoria Blue and James I. Blue; and her sisters Betty Bain, Martha Gregg, and Linda (Carl) Brown; as well as numerous nieces and nephews. Maxine was raised in Vardaman, Mississippi. She graduated from Vardaman High School in 1957 and married Jim Blue while he attended Mississippi State University. Together they spent 21 years in the U.S. Army and were stationed around the world until Jim’s retirement from the service in 1981. While raising her children, Maxine was very active in a variety of service organizations wherever they were stationed. Upon Jim’s retirement, they returned to Vardaman where Maxine began 30 more years of service to her community, including managing the Community Center, serving on the Sweet Potato Festival committee and acting in various volunteer roles at her beloved First Baptist Church of Vardaman. Maxine devoted her life to living out her faith, service to others and giving back where she found a need. It was important to her to be involved in the community, but most important to Maxine was family. She was a devoted and loving wife, mother, grandmother and great-grandmother, sister, aunt and friend. In early 2017 Maxine and Jim moved to a retirement community in Atlanta. After Jim’s death Maxine moved to Safe Haven at Lenox Park in Atlanta, where she was well cared for the reminder of her life. The family is deeply grateful to the caregivers at Safe Haven for the love and care they showed Maxine. In lieu of flowers the family asks that donations be made to First Baptist Church of Vardaman, 302 N. Main St., Vardaman MS 38878. Funeral Services will be held Saturday, December 12th at 1:00 p.m. at the First Baptist Church of Vardaman. Internment will follow at Hillcrest Cemetery.

To send a flower arrangement or to plant trees in memory of
Maxine Blue, please click here to visit our Sympathy Store.