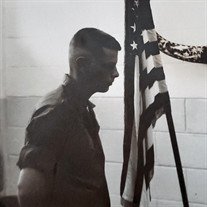 James K. Boggan, Jr., 68, passed away on December 24, 2020 in the hospital after an extended illness. Mr. Boggan was the son of James K. Boggan, Sr. and Ruth Boggan of Aberdeen.

Mr. Boggan retired from the military after serving honorably for 20 years and made his home in Aberdeen.

Mr. Boggan is preceded in death by his parents, two brothers and a sister.

Mr. Boggan will be laid to rest at Greenbrier Cemetery in a private family graveside service.