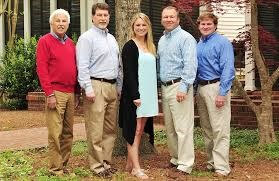 Bailey Robert Williams, Sr. died Thursday, Jan. 7, 2021 at his home in Corinth. A private family service is set for 1 pm Thursday at First Presbyterian Church with interment at Henry Cemetery. Due to Covid-19, services may be watched live via Zoom at www.fpccorinth.org by clicking the link on the left. Rev. Waring Porter and Dr. Donald Elliott will officiate.

Bailey was born in Corinth on July 29, 1936 to the late Dr. Fayette Williams and Margaret Schumpert Williams. After graduating from Corinth High School in 1955, he received his B.A. and M.B.A. from the University of MS. In 1968, he founded Bailey Williams Insurance Agency, followed by Bailey Williams Realty in 1970. The business recently celebrated its 50 year anniversary. He was honored by the City of Corinth Board of Mayor and Aldermen with the key to the city for his hand in promoting Corinth for 50 years.

He was a member of First Presbyterian Church and served as Elder Emeritus. Bailey was a member of the Rotary Club of Corinth and received the Paul Harris Fellow Award. He also had the pleasure of being involved with the Mississippi Association of Realtors, Pickwick Yacht Club and Sigma Chi Fraternity. Bailey enjoyed volunteering at the AMEN Food Pantry and Lighthouse Foundation in Corinth.

Bailey was a true gentleman and never met a stranger. His absence will be felt by all who knew him. He had a deep love for Corinth and said he felt bad for people who didn't get to experience life here. He enjoyed a life of boating, including earning a US Coast Guard Captains license. He was also an avid Ole Miss fan.

He was preceded in death by his parents and two brothers, Dr. Fayette Creed Williams, Jr. and John Burton Williams.

Memorial contributions may be made to the AMEN Food Pantry of the Lighthouse Foundation in Corinth.

Memorial Funeral Home is in charge of arrangements.